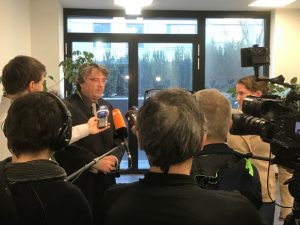 In November 2019, the Bavarian Labour Court in Munich heard the first employment misclassification lawsuit in Germany brought by a crowdworker. The crowdworker, with legal support from IG Metall, claimed that the platform had incorrectly classified him as self-employed. He was, he said, in practice treated as an employee. On December 4, 2019, the Court ruled in favor of the platform. The ruling of the Court offers important lessons for platform workers, however, especially regarding the question of employment (mis)classification under German law.

The plaintiff started working as a so-called “microjobber” or “microtasker” in Februrary 2017, doing between 15 and 20 hours’ worth of work per week on one platform. The main service of the platform in question is to have crowdworkers document retail locations – such as gas stations, supermarkets, and specialty stores – with text and photos. The plaintiff earned around 1,750 Euro per month by doing these tasks.

Shortly, though, everything changed. In Spring 2018, the platform claimed that the plaintiff had submitted unusable photos for a task. They sent him an email, saying, “Apparently your understanding of the tasks is quite different from ours. To avoid future disagreements, we will not be offering you any further tasks. We ask you to pay out your current account balance in the app. We will then deactivate and delete your account.”

With the support of IG Metall, the plaintiff sued the platform, alleging that the platform’s claim that he has worked as a self-employed person was false, and that he should in fact have been classified as an employee. The Munich Labor Court ruled otherwise, as did, on appeal, the Bavarian Regional Labor Court in Munich. Christiane Benner, Vice Chair of IG Metall, said, “The ruling is not what we expected. In our view there are clear signs that the plaintiff should have been classified as an employee. We will wait for the written explanation for the ruling – and then decide if we will go before the Federal Labor Court.”

In the oral explanation, the judge noted that:

Attorney Rüdiger Helm, who represented the plaintiff, noted: “We have learned in this case how important this three-week time limit can be. If you are kicked off a platform [and you want to dispute it], you must act extremely quickly.”